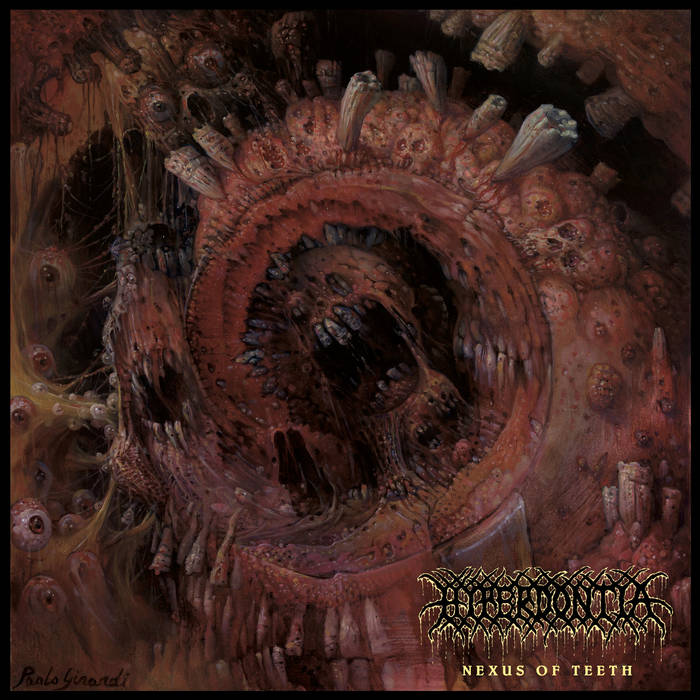 There’s a lot of cool stuff bubbling away in the underground Death Metal scene of today and Hyperdontia seems to be contacted to vast majority of it. Danish/Turkish affair has former members of Burial Invocation in it, who highlighted this year with their exceptionally good debut album ‘Abiogenesis‘. Their bass player has been in Necrowretch, one of the busiest death patrols of the underground. There are guys from Phrenelith onboard who broke through to everybody’s awareness with their album ‘Desolate Endscape’ last year and dropped maybe the finest EP sized slab of Death Metal this year with marvelous ‘Ornamented Dead Eyes‘. Drummer Tuna (Sulphurous) and guitarist Mustafa (Engulfed, ex – Burial Invocation) are present, and then of course there is the modern day underground legend David Mikkelsen on board. The man behind the classic sleaze patrol Undergang, who everybody into Death Metal should know anyhow.

Alrighty then. Hyperdontia has the know-how how to mould murky underground Death Metal. Roger this. But there’s still more to raise interest.. Besides the impressive troops of doom they have also one of the best logos in Death Metal. The name of the band –Hyperdontia – is a medical condition of person having supernumerary teeth. Hah! This is only getting better! Yet, none of these are the reason why ‘Nexus of Teeth‘ is picked up by the vast majority of the underground Death heads. No. It’s the way that Hyperdontia stormed into everybody’s consciousness with their debut demo/EP/mini-release ‘Abhorrence Veil‘ in 2017. Its Morbid Angel-worshipping, angular, monstrously heavy and razor-sharp songwriting more or less won everybody over who just dared to take a spin. That impressive game-opener gained them a record deal (like it should have) and here we are now with the debut album ‘Nexus of Teeth‘, coming out through Dark Descent Records. And the mind boggles!

The first impression that hits you very fast is that ‘Nexus of Teeth’ makes no excuses. This is absolute Death Metal. 669%. Maybe a bit more complicated with riffs than the EP was. Maybe utilizing a few more blast-beats and double-guitar harmonies as well. David Mikkelsen’s vocals are as deep as ever, gurgling and inhuman in manner, all set to rub the mainstream guy the wrong way. Nice. Songs like ‘Of Spire and Thorn‘ are almost proggy, with several changes in both tempo and mood. ‘Aura of Flies‘ holds unstoppable drive to it, next to one of the best song titles of the year. There are slower patterns too, quite familiar with Doomier Death acts, occasional Thrash riffs and of course – a hefty amount of Morbid Angel worship, especially in ‘Escaping the Mortal Embodiment‘. Yet, the best ode to gore has been saved to last in shape of the stunning album finale ‘Existence Denied‘.

It is easy to say that ‘Nexus of Teeth‘ has all the ingredients to it everybody would expect it to have. Maybe a bit too much even. Somehow, it lacks in that something very essential ‘Abhorrence Veil‘ had. Maybe it is just the element of surprise? The album is at least a bit messier with sound, and not exactly in a good way. Drums and vocals are drowned under layers and layers of guitars and the drive of the album suffers because of this. As a matter of fact, ‘Nexus of Teeth‘ is more demo-like than ‘Abhorrence Veil‘ ever was. It is a solid Death Metal record, but not the pinnacle of the genre. When compared to the aforementioned ‘Abiogenesis‘ by Burial Invocation it sounds way less adventurous and more common. It does not reach the gory heights of previous two Undergang albums and is not as convincing as the ‘Ornamented Dead Eyes‘ EP of Phrenelith is. ‘Nexus of Teeth‘ is a quick fix to acute hunger of morbid Death Metal, but somehow the great expectations are not fully met with it. ‘Nexus of Teeth‘ is a case of being damn close, but yet somehow just a little bit too far. Or maybe the first demos are always the just the best.

Get your teeth into this right here!