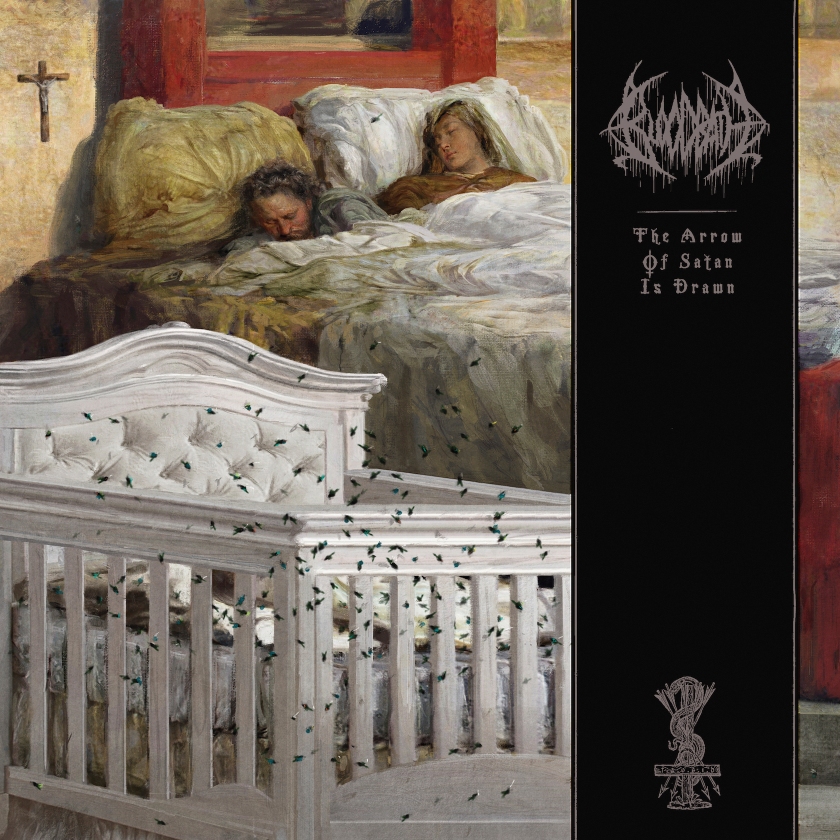 For those of you who are unaware, Swedish Death Metal gods Bloodbath are the product of a bunch of really talented individuals all sitting around one night, one would like to think drinking, nay, quaffing from large tankards of beer. At some point during the telling of all the latest jokes in Sweden at the time (like that one about the two screws and the Ikea chair hahaha, and that other one about the Lingonberry and the Herring hahaha, so good), one of them suddenly blurted out in a slightly slurred manner “Hey guys, let’s form a Death Metal band that keeps the integrity of the old school together whilst also taking some style and direction from the newer stuff out there. That’d be fun hey?” Silence filled the room that only moments ago was a flood with raucous laughter and general merriment..
No-one, except those actually there, and maybe their friends, and there friends friends, and maybe a couple hundred more people (no-one really in the grander scale of things, I mean look at how many people were actually even ON this planet at the time. It’s a lot, trust me.) knew exactly who suggested the plan, but the silence was then replaced with an almighty “JA” (yes in Swedish duh) and the clinking of glasses and then more swilling and hilarity ensued till the wee hours had had enough and decided that they too must go to bed and leave these mad men at it. This is the legend as it was told to me anyway.
Thus Bloodbath came to be, Many have come and gone since that fate filled evening, including such Metal luminaries as original vocalist Mike Akerfeldt (Opeth), Dan Swäno, multi instrumentalist extraordinaire (Edge of Sanity, Ribspreader and a list as long as your arm more), Peter Tagtgren (Hypocrisy, War, The Abyss) also on vocals for one album – 2004’s “Nightmares Made Flesh”. The drums have been a relatively stable affair, with Swano handling duties up until 2004 when Opeth (and another long list of names) drummer Martin Axenrot picked up the sticks and took it from there. Guitars and Bass have been shuffled around like a magicians card deck over the years but the two mainstayers have been two guys from those other famous guys Katatonia, namely Jonas Renkse and Anders “Blakkheim” Nystrom, each doing both one or the other when needed. Three other guitarists have been involved in the project – namely Per “Sodomizer” eriksson (2008-2017), Tomas Akvik (2017-2018), and the latest edition to the gang Joakim Karlsson (2018 -).
Whew, yes that took a while, but is totally necessary as far as I am concerned to give credit where it is due to every member who has contributed thus far to the evolution of Bloodbath up until this very moment. You can look up their discography almost anywhere. Titles such as 2002’s “Resurrection through Carnage”, 2008’s awesome EP “Unblessing The Purity” and then 2014’s “Grand Morbid Funeral”, all in a class of their own regardless of who did what on which so to speak, nothing more or less than timeless A grade Death Metal. The last one mentioned also reminds me of something, and I wonder if you had noticed and have been shouting at me all along. “What about Dick Gnomes”.. Huh? Who the fuck is ‘Dick Gnomes’’ man? You’ll have to speak up!! OH! Right! NICK HOLMES! Ha-ha-ha. I was just fucking with you, yes indeed, what of him. Well, there is a reason I left him out until now as you will see.
Hot off the back of whatever the fuck was giving Paradise Lost the inspiration to record the “The Plague Within” album, one of their heaviest and Death/Doomiest for some time to be released the next year, Nick, or ‘Old Nick’ as they called him, burst into the Bloodbath camp like Miley Cyrus trapped inside 4 ton of round lead on a chain, i.e. a fucking wrecking ball of great wreckingness. One thing that the other two Bloodbath vocalists had previously exhibited was a no nonsense, evil as a room full of smiling Papists and heavy as all really fucking heavy shit attitude towards their delivery, and our mate ‘Old Nick’ was not going to do anything less by a long shot. Although it had its detractors, “Grand Morbid Funeral” was another fantastic addition to the Bloodbath legacy, and Nick Holmes was the perfect fit. So what if I’m an unashamed fan of ALL of his work, and that is that.

So, 2018 brings us full length number five – “The Arrow of Satan Is Drawn” and apart from a cool title (I never knew Satan was into archery until now), and a fucking sick cover, what have they delivered unto the masses this time around. Well, I’m glad you asked, otherwise I would have nothing better to do with my spare time apart from a little train spotting and bird watching. Actually I think trains are rather dull, and bird shit is very annoying when it gets on your car. Yes, I don’t care how beautiful your plumage is, nor how angelic your chirping at 5am in the morning is, invent a bird toilet for Christs sake. You don’t see me shitting on your nest do you?
Digression is my thing, and I need to stop it.. What we have here is one big fat juicy HM-2 soaked bundle of cheery tunes my friends. Following the rules of Swe-Death to a certain point, and then coating it with a fair amount of flair, and a giant handful of gusto. You knew this was gonna be heavy, if you are a fan, and if you are not, then be prepared. The levels of pure down and bottom ridiculousness these guys can achieve has never been in question as far as grunt goes, and yet again they do not disappoint. It starts with track one “Fleischmann”, and ends with the glorious “Chainsaw Lullaby”. No point in going track by track, because Bloodbath are not all about reinventing the steel as it where, they are more about having some goddamn fun whilst caving in your scone.
Yes, they certainly manage to pack in a fair bit of variety into each song so that you don’t feel like you are being fed a four day old loaf of bread, but at its heart, “The Arrow of Satan Is Drawn” is plain and simply fucking enormous Death Metal on a grand scale that the connoisseur will eat up with relish. Pick of the crop? “Only The Dead Survive” is a perfect example to all wannabes out there on how to riff a man to death, and then stomp him into the ground just to make sure he doesn’t get up again. A more mid paced affair, and that is exactly where I think they shine, this one is pure unadulterated nastiness. Kudos also go to “Levitator”, which from the beginning is as crunchy and brutal as that time you fell into a bowl of cornflakes and split your head open on the side of the bowl. Killer stuff, a riff fest of the most magnificent type, and a solo that although somewhat off kilter to my ear (did someone just say dissonant?), is pure genius in the whole scheme of things.

Fuck. okay, “Deader” will kick you in the sensitive parts until you wish you didn’t have them, “Warhead Ritual” makes me think Lemmy popped in for a quick drink with the chaps for a brief moment to start with and then turns into a fucking monster the size of yo mama’s arse, and the rest? You’ll just have to listen to. I’m exhausted. Coming up with so many stupid ways of explaining things takes its toll people, and an album this good makes one think of so much utter shite to throw in your general direction that I think I better have a good lie down…
You like Death Metal, done exceptionally well by a bunch of fucking legends, then you will like this most certainly. Don’t look into it as world changing, or life affirming, or even the type of album that will make the whole Death Metal scene have a sudden change in direction, look at this one as the best fun you will have listening to a pack of the most excellent bastards having the time of their lives brutalizing you in the most horrible ways. You will love it!
Rating – 4.5/5