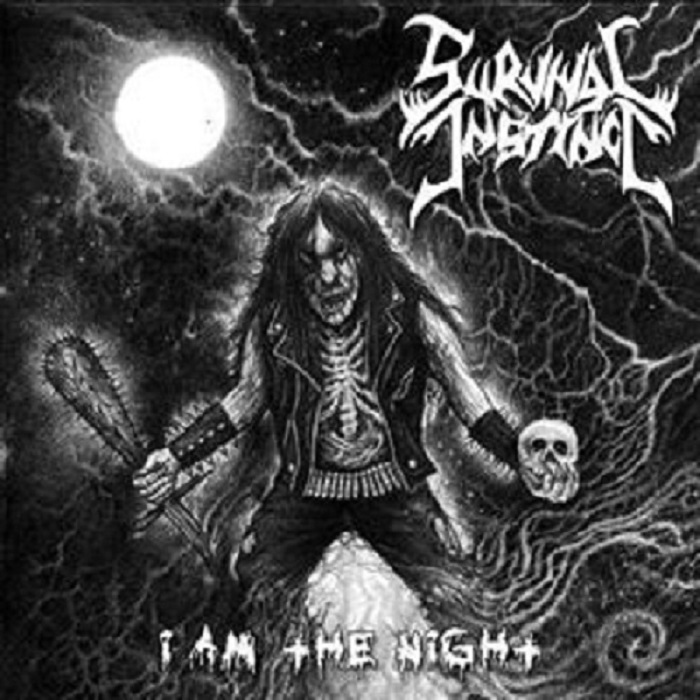 And here I present to you more of Canada’s finest, being a band called ‘Survival Instinct‘, and yes, they do indeed contain the members of many other Canadian bands such as Paladin, Kremlin, heck, even Torturer, but I have been through this before on my Paladin review so go look at that and let me get on with this please…
If this album, that being “I Am The Night” (“Evil in the Night” – Paladin, have these guys got something about the night? Are they gonna be in Lost Boys 2? Stay tuned!), was an actual person, it would be wearing tight denim jeans, a sleeveless denim battle jacket, and a pair of high top sneakers. Yes, It’s old school Thrash Metal we are dealing with here folks, and a mighty fine thing that is.
Again, as seems to be the way with these chaps, production values are kept at the raw end. One thinks that this album has such an authentic old school sound to it that it may well have been recorded in the same toilet as that famous Metallica demo that had something to do with having some Metal up your clacker. Nothing wrong there, it lends the album a spectacular sense of authenticity that is hard to beat.
So pick your favourite early eighties band, Speed or Thrash, and you will find much to like here trust me. Did I mention the dude that may represent this album has a collection of the finest t-shirts? Yep, it includes such luminaries as Nuclear Assault, an old Slayer one with ‘Hell Awaits‘ on it, there’s an S.O.D one in there somewhere. An old punk t-shirt or two, maybe an ‘Endless Pain‘ one in there also. Is that an Infernal Majesty shirt I see over there? Quite the collection. Quite the dude.

If the intro, aptly named “Intro” doesn’t get you all hot under the collar, then “For Murder” will most certainly, or you need your head read. Pure aggression, flat out as the finest piece of road kill your momma ever gave you on your birthday, this shit is the proverbial bomb. If The Great Mackintosh still had hair, it would be flying, and all furniture in the house would be in severe risk of being damaged in some way, shape or form. Vocalist Martin Paquet (yes, he of the Outre Tombe variety, which if you didn’t already know is also another fucking Canadian conspiracy to take all of our hard earned cash), is in fine form here. Think along the lines of a more old fashioned hardcore/punk type of delivery, or maybe how odd you felt when you first heard Sean Killian (Vio-Lence) sing. No, it’s not the same tone, it’s just the delivery, and yes, it fucking fits extremely well.

(“13 Witches” – More fucking excellence to be sure!)
“Dread Mind” had me looking around for Sergeant D at the beginning, I shit you not (look up S.O.D if you have no idea who that is), and then pans out into a pure example of sheer thrashly goodness. Mosh pit city right here folks, best start calling the ambulances now so you don’t have to wait too long. People get hurt around this kind of music, and well they should.Title track ‘I Am The Night” has nothing at all to do with Batman, but is as sure as shit as angry at the world as the caped crusader could ever be. If you are not convinced after this performance, the best you find God or Kanye or some other crap to indulge in.
“Morbid Pleasure” is indeed pleasing in a morbid kind of way. More Thrash riffs to keep you on your toes, a classic example of old school reborn in every sense of the word. These guys may as well have come from the Bay Area as far as I’m concerned, and I am starting to notice that the Canadian Metal scene is just bat shit crazy. The whole sound and energy that Survival Instinct put out there is as good as it ever was, and as good as it ever can be. “Metal Hell” combines some fierce driving power with the sort of speed that would have Destruction back in the day looking over there proverbial shoulders. The subtle nuances thrown in as the riffing beats the shit out of you is on par with anything any of the big guys of the scene have ever released.
Roll on to “Reign Of The Beast” for another example of why we should hold this bunch of Metal Maniacs in very high regard. The mid section tempo change lulls you into a sense of somewhat calm before they kick you right in the groin region and remind you that they are very serious about thrashing the living shit out of everything and everyone you have ever known. “Vortex” follows a similar game plan, a swift uppercut to the jaw from a raving lunatic and an elbow in the kidneys to make you feel more alive. The beauty of this album is simply that it does indeed make you feel alive, even if you have become old, soft, flabby and cynical over the years.No room for cynicism here folks, they don’t get much more genuine than this.
The end is delivered in brutal crushing style with “Wrath”, a final homage to all that is possible when you really love what you do, and that is the thing with Survival Instinct, you KNOW they are loving every minute of this. Clocking in at a whopping eight minutes according to the tracklist,this little number starts out ripping and tearing at you, and then becomes the kind of riff fest that we all adore, before suddenly disappearing into silence for a while, and turning into a fucking superb bonus track, that being a live cover of Slayer’s almighty “Necrophiliac” from the bible of thrash, “Hell Awaits”. I did mention that the dude that is the very personification of this band owns the shirt didn’t I ha-ha.
And back to that whole if the band was a person thing, this person would be the kind of friend that you want at every occasion. Mad as a cut snake, prone to sudden outbursts of fucking awesomeness and as old school as fuck, This dude knows his Metal, and it shows. He’s been listening to it since the very beginning, and thus deserves a shit ton of respect as well. He has been to Hell and back, and somehow his Survival Instinct has kept him not only intact, but made him one heck of a bloke in the process. Let us praise our new friend, for he is indeed, as Metal as fuck.