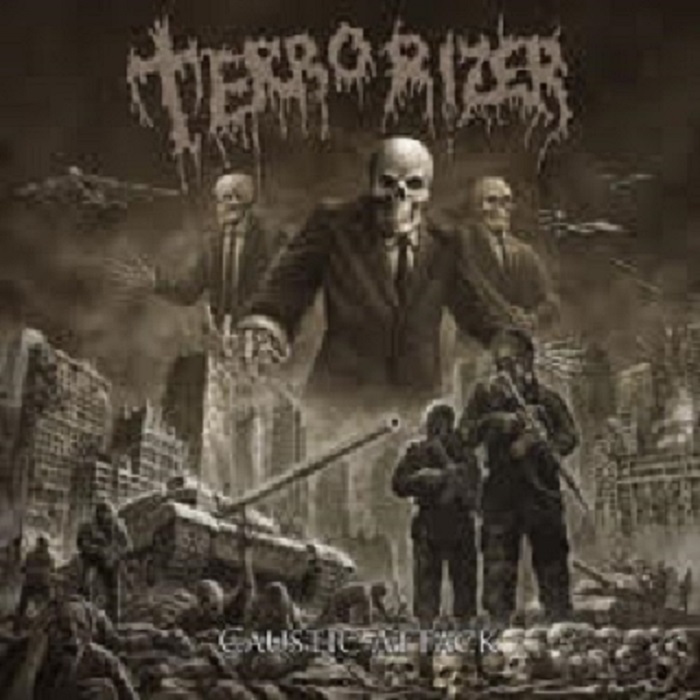 The status of an Extreme Metal legend can be a bit of a diluted thing in promo kits. Bands with minor, or almost non-existent merit are being tagged as such, even only few can actually claim to be the real thing. Then there are, of course, the real living legends. The kings, who do not need such tags to blow their own trumpet. The bands who dominated the dawn of Extreme Metal back in the day, and have managed to maintain their leadership through the years in undisputed manner. The ones that the bands with those fancy promo letters look up to. And on the top of that tree are two bands for me – Napalm Death and Terrorizer, who single-handedly brutalized the eardrums of the unprepared in the late 1980’s AND have kept the flag flying up high to this day. Whereas Napalm Death have been constantly releasing albums and touring extensively, their USA colleagues Terrorizer have had a bit of a bumpier ride.

I’m pretty sure most of you are aware of the colorful history of Terrorizer already, and as we are looking now to the present and not to the past alone, we shall cut the long story short: Formed in 1986 Terrorizer were the definite pioneers of Extreme Metal and Grindcore. Their demo’s were more or less the most violent thing in the late 80’s underground, and their debut album “World Downfall” (1989) remains to this day as the most essential Grindcore album ever released. An ABC of Punkish Deathgrind, if you wish. After “World Downfall” Terrorizer disbanded and its members became the foundation of bands like Morbid Angel, Napalm Death and Nausea. That alone speaks volumes. In the 21st century Terrorizer have been coming and going, with different line-ups and with different record labels on each release. Right now, we are preparing for the launch of the fourth grind rocket in 30 years, as their latest album “Caustic Attack” is to be released via The End Records on October 12th.

The current trio version of Terrorizer is by far the most Death metallic one to date. Along with drum legend Pete Sandoval (only member of the band to appear on all Terrorizer albums) “Caustic Attack” features the talents of Monstrosity men Sam Molina (bass, vocals) and Lee Harrison (guitar). And it is their presence that makes “Caustic Attack” the album it is. The new dudes have done a fine job in balancing between the Grindy/Punky legacy of Terrorizer and their own career with such bulldozers as Malevolent Creation, Monstrosity and Atheist. They have brought control, heaviness and more developed song structures to the arsenal of modern day Terrorizer, to stand next to the furious blast bursts and uncontrolled energy. Due to this “Caustic Attack” is the most precise Terrorizer record to date. Both the riffing and the drumming are top notch. All the way up there with household Death Metal names like Deicide, Suffocation and Cannibal Corpse. The well documented back problems of Pete Sandoval seem to be in the past, as the master blaster is playing more fiercely now than he has ever done, since his early days with Morbid Angel. Fans of Monstrosity and Malevolent Creation will welcome the chugging riffs and mid-ranged Death growls of “Caustic Attack” with praise. If Terrorizer was a bit all over the place in the past, they cut rather surgically now. Material on the album alters between one minute slashes and more heavy numbers like “Trench of Corruption” and “Infiltration”, both clocking almost five minutes of Death Metal mayhem.”The Downtrodden” reminds us even a bit of Morbid Angel‘s supreme heaviness which most definitely is a new thing for Terrorizer, who always were rather the Punky street-thug brother of the eccentric Death Metal twin.

And in here lie both – the pros and the cons – of “Caustic Attack”. When balancing in between the lengthy Death Metal numbers and short Grind bursts the album becomes maybe a bit divided for the listener. As you’ve gotten used to the effectiveness of Grind, you are suddenly being hammered by numerous heavier riffs in one song alone. And as all the longer Death Metal numbers of the album are being lined up one after another, at the middle-way through the album (like a Death Metal steak in the centre of a Grindcore burger) the listener tends to stray. Maybe the “Peter Tägtren method” of composing a album with faster and slower songs following each other would have made the album sound more varied. “Caustic Attack” could’ve been also a couple of minutes shorter, certainly.

Nevertheless, “Caustic Attack” is a welcomed return of a legend. It is a new, fresh-sounding chapter in the long and turbulent history of the band, and it is by no means a bad record. Far from it. It takes the sulphurous heaviness of Florida Death Metal and marries it with relentless Grind. It is most likely to grow on me still with more time and spins, so this is not a final judgement here, rather a early observation just. It is better a record than their comeback “Darker Days Ahead” was and if “Caustic Attack” is the album that takes Terrorizer back to stages, it needs to be hailed as one of the essential releases of the year without a doubt. But the bottom line here is that to this day Terrorizer have not released a weak album. Each of them have been a bit different to each other and each of them have become important in their own way with time and “Caustic Attack” is not an exception to the rule. Welcome back, sirs.