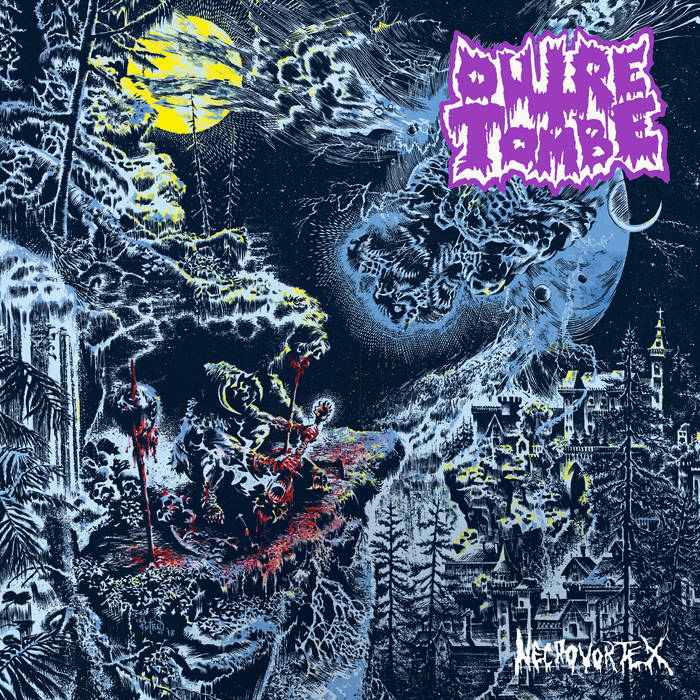 Old school Death Metal has always been the most accepted sub genre of Death Metal from new comers on the scene to the old school elitist types. It offers the technicality for the most proficient of listeners, to absolute bangers of riffs for the more groovy types. The Québécois four piece, Outre-Tomb comes back after three long years since their last album, “Répurgation” which I absolutely loved, but believe me when I say, “Nécrovortex” is right now their magnum opus, and one that is going to be extremely difficult to top. It blends every one of their influences so well and they make it sound damn near effortless.

Artist, Matt “Putrid” Carr has outdone himself with the album cover which consists of a dark, cold, gloomy night with some kind of ritualistic ceremony, and a witch like being on the side of a cliff with impaled skulls around it. Blood lies everywhere, overlooking what looks to be a city all intertwined into a mountainside. Based off the art alone you can tell this album is going to be an evil, death ridden killing machine.

From the ominous start of the song, “La Crypte” it throws you into a murky soundscape like collage combining stone sharpening solos with boulder sized huge sounding riffs. The production is a fantastic mix of a great old school sound with reverb on the vocals to crisp new school that makes every note standout.

Vocalist/bassist Crachat gives a great vocal performance with tons of Chuck Schuldiner influenced vocals (I guess everyone has been influenced in some way by at least one of the founding fathers) with more of a “Scream Bloody Gore” vibe on the vox which in my opinion is the best Death record, but I digress.

The eighties influence almost certainly shines through on this record, but they make it their own, and they play it perfectly. The breakneck speeds of, “Nécrovortex” will make you swear they’ve been doing this for 30 plus years. It’s fast, aggressive, and pummeling. If you’re a fan of extreme music then you should have a really easy time jamming this one.

Start the ceremony, commit your life to the rituals and head bang until your head falls clean off. Outre-Tomb is about to take you back the golden days of neck breaking Death Metal. October 17th can’t come soon enough

Find this one here!