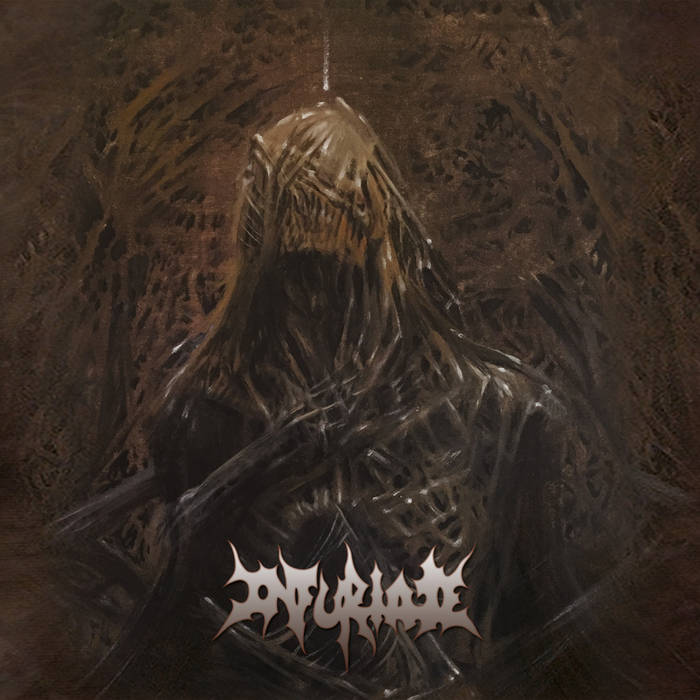 Good death metal is beyond being just music. Serious bands strive to create their unique style of pulverizing art that annihilates their fans. Their music takes the fan’s mind on a unique journey created by the grimy and grindy soundscapes of the band’s efforts to push their limits as a team. A team that together on their music album seems to behave like an unpredictable, unrelenting and merciless monster which you cannot get enough of. Obviously Infuriate is one of these bands, or else why I would describe this here, and why my friend would get inspired to write the following story from his visions while listening to this band?

The room was dark. The bare bulb was half hidden behind the furnace looming in the center of the room. Shadows fought against the light in an everlasting battle for dominion over this space. Though it was midday above and beyond these walls, the three small windows into the basement had been painted black long ago. Sparse beams cut through where paint had rubbed or flaked off over the years. Given time to adjust, your eyes would eventually pick out the figure crouched over the decrepit workbench in the corner, deep in shadow, though you’d likely hear his low, incoherent muttering first.

The man’s powerful shoulders are hunched in his filthy white t-shirt. His feet are wrapped in threadbare socks provide a foundation for his slow, near imperceptible rocking…back and forth…back and forth. His eyes glaze as they seemingly stare through the crumbly rock of the ancient foundation. It’s his hands that seem to see, as he lovingly picks up each implement before him, fondling it, stroking it, then gently laying it down before him again. Ball peen hammer…2….3…4. Wire cutters…2….3….4. Crosscut saw….2….3….4. All is done with the same gentle rhythm. That is, until his meaty hands reverently touch….grasp….pick up the linoleum knife. Slowly, his left hand grips the handle while his right gently traces the curve of the back, then the front of the blade, leaving a thin line of red on his right index finger. His eyes focus on the sharp steel as his back straightens, throwing his shoulders back into a position of greater strength. A leering grin settles on his fish lips as he slowly, but purposefully strides towards the door heretofore hidden in the corner on the other side of the furnace.

The door banged open as the busboy angrily slammed out, both hands full of the tops of rancid trash bags. He was supposed to be on his way to his girlfriend’s by now, but his boss didn’t care. He’d been told to stay late or not come back, and he needed the money. But, man, she was gonna be pissed. He threw the bags down and slammed open the lid of the dumpster. As he was about to retrieve the bags to toss them in, something caught his eye. Standing on tip toes, he leaned over the edge for a better look, and then he was on his knees vomiting. Deep in the shadows, the large man grinned his leering grin and began to shamble off to begin planning his next art project. For the first time in months, he felt happy, whole, but he had to keep creating to maintain this feeling.  Work, work, work….

Yes, good death metal like Infuriate can inspire such visions, and evoke a powerful feeling in the listener. Although I do not have such visions, I always enjoy a relentless and technically intricate band giving their best.

Infuriate have released a new brutal beast in their debut self-titled album. They saw what is missing in modern albums and took it into their hands to deliver the goods. They take inspiration from classic 90’s technical bands such as Deeds of Flesh, Suffocation and Severe Torture. What is common among these bands? They stay true to being ‘old school death metal’. Infuriate inherits their lineage while adding their own Texan flavor and packing their album full of head splitting and groovy riffs. They also remind me of their brothers in Massachusetts’ band Scaphism. However, like these mentioned bands, they also create their own unique formula of ear annihilation along with a lingering dark and suffocating atmosphere. Their whole album is like a unstoppable fiery riff machine constantly hammering and piercing you. A well chosen band name indeed with ‘Infuriate’…

I rarely see bands like this having all-round performance in every aspect. Nothing less expected from a supergroup formed from multiple other good bands. Infuriate take you into a spiral of cycling non-stop riffs under the hateful harsh vocals. The drum and bass are top-notch, executed with a surgical precision like the guitars. The murky and muddy art complements the music perfectly, and certainly brings similar vibes while listening to the album.

Although I could not find any surprising or ‘what the hell?’ moments in the album, Infuriate manage to keep me engaged and constantly headbanging with their slab of raw death metal. They set well-defined boundaries, stay within those boundaries and pummel you till you surrender. It is impossible to not get pulled into their meaty machine and stop yourself from grooving along with them if you like this kind of music.

Watch out people, Infuriate is the new cool death metal band on the block, and with such an awesome debut full-length it doesn’t look like they are going to give up the position with excellent new material in the future. A no-brainer must have album for a trve death metal fan.

Released on Everlasting Spew Records. You can find the album here:

Haldron simply loves to support good death metal bands after realizing the huge amount of trouble they go through just to get their music out. He recently started using album reviews as one of the channels to support these bands and promote their underground extreme art.

Hayduke X has been writing for MoshPitNation since June of 2016. Prior to joining the MoshPitNation team, Hayduke published reviews on his own blog Rage and Frustration. In addition, he has DJ’ed an online metal radio show of the same name as his blog, written for TOmetal.com, done interviews for Metal Rules, and collaborated with The Art of B productions to create video interviews with a wide variety of bands.