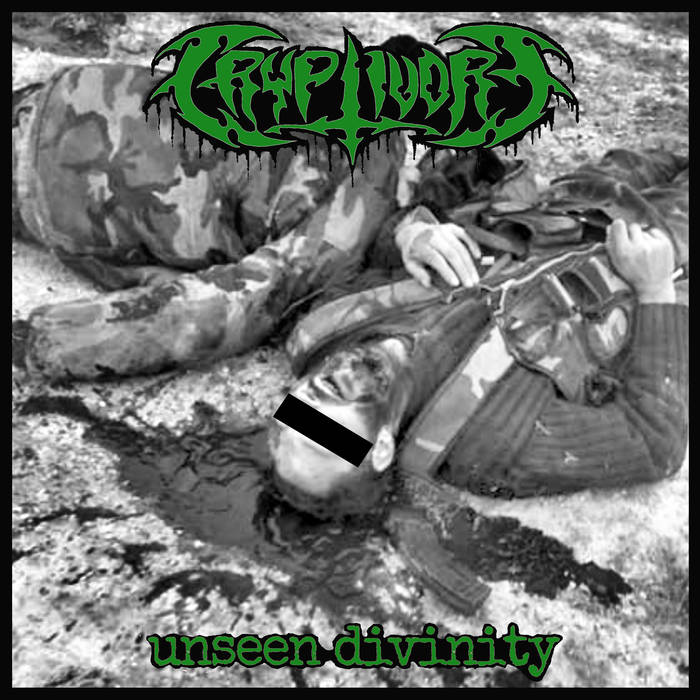 Australia is a funny country, trust me, as I, The Great Mackintosh, happen to live here. Yes, to the rest of you we are upside down, down under, ride Kangaroo’s, and possibly eat our first born whilst fighting off spiders and snakes and all other known threats to the human species. To us, this is the normal way of life, and we are much harder for it. When it comes to Metal, you bet we are leading the fucking planet at the moment. Nothing is harder than an Aussie Metal band, apart from maybe watching a Pom (Englishmen) drink warm piss (Beer).

Australia is also known for its particular difference between our States, of which we have six, and our Territories of which we have two. Now you can go and fucking google that shit, for the purposes of this review we shall focus on exactly where this band, being Cryptivore, comes from, and that is Queensland. To the rest of Australia, QLD (as it shall now be known) is a bit of a laugh. More like the south of America, it’s hot, it’s got Gators, and the people are generally like another breed from the rest of us, trust me. Half of the state wants to remove itself from the lower half of the state, which would also like to remove itself from the rest of Australia..Confused? So am I, and as stated, I live here hahaha.

So here we have this dude, and just in case I didn’t mention it Cryptivore are a one man act, that lives in a strange place but seems to have his head screwed on just right as far as Metal goes. How does this happen? Well, maybe I forgot to told you that QLD does have its fair share of Metal bands, and a lot of them are actually rather good, and also he has been a huge fan of our favourite product since the day he was spat screaming onto this filthy planet by whatever unholy force decided to deliver him here. Yes, put simply, the man knows his shit, and he brings a lot of this love to this project that’s for sure.

Cryptivore are, or is, for all intents and purposes a blend of some of the finest things that the harder side of Metal can bring to you, the listener. Straight off the bat you are being treated to a fucking pounding of immense proportions. It would be very easy to name names right at this very moment of which influences you think are on board, and by all means go for it, but I suggest you digest a little more before you do. Long songs these are not by any standard, but much depth is to be found within!

Genre wise, well, you can quite easily spit out a few. Death for sure, Grind is also present, maybe a little bit of Punk attitude here and there, and old school Hardcore (Not the sissy shit they call anything core these days). A superb sense of melody aka the classic’s that formed and forged Metal itself rears its ugly head amongst the carnage, and those astute will hear it for sure. Riffs to crush all that ever was or shall be?, You want them, you got em. Vocals that sound exactly like the unutterable horror that lurks in your local swamp that you were too afraid to go too as a kid? You get them as well. The old school Metal fan will derive a lot from this, and the newcomer will get just as much of a fun ride.

Yes, the sort of album that although short, will have you hitting the replay button just as soon as it ends. The sort of album that makes a good soundtrack to knocking down walls, smashing up cars, and telling your annoying neighbours to fuck right off. Not to be played at nursing homes or around the skittish at all, unless you want a good laugh.. Sure, it contains many an element, but it’s the way the whole thing is put together that makes it all so fucking entertaining. Want a highlight? Go buy it yourself at the highly unreasonable price of One Australian Dollar, which is worth about two crab shells and half a donut worldwide.. Why not hey? I guarantee you won’t regret it.

Great things here, and great thing’s to come if he continues. Surely the world needs more of this kind of thing.