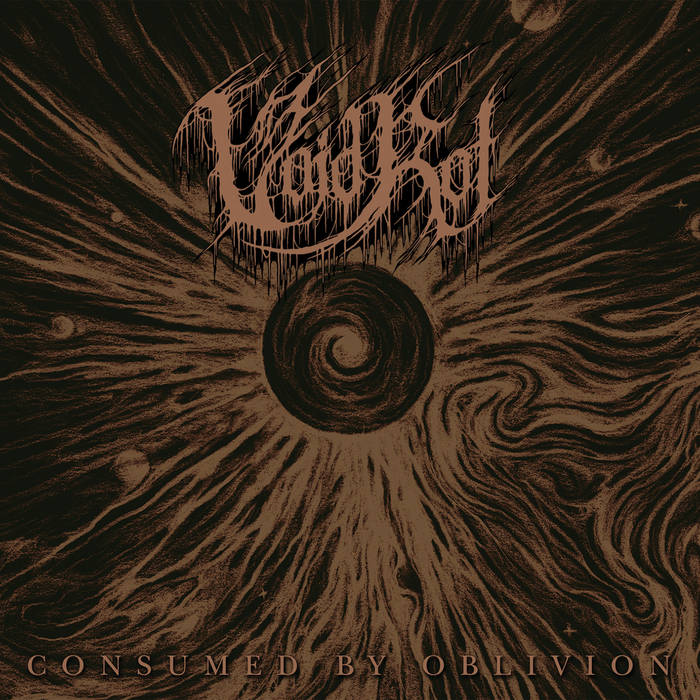 With a combination of Everlasting Spew Records and Sentient Ruin Laboratories backing something then you sure as fuck know that it’s gonna be good, or you have been living under a large boulder somewhere on another planet. Yes, these two fine entities bring us some of the finest music available on a regular basis, so let’s see what they have to offer us mere mortals this time.

Void Rot hail from Minneapolis, Minnesota in the good old USA and describe themselves as ‘Cosmic death/doom’, a fact that is certainly not far from the truth. Yes indeed, they come to us with a sound that encapsulates both the bleakness of the blackest reaches of the universe, and the foul putridity of the rot that eventually envelops all living matter. I’d much prefer to just say they are as heavy as all fuck and just leave it right there, much easier after all.

Opener “Celestial Plague” starts of about as warm and fuzzy as this EP can be, and by that I mean it marches into the room like a funeral procession for a dying galaxy. Slow and ponderous, filthy grime covered riffs crushing you to the sound of some great old god from another place and time telling the tale of the demise of all that ever was and will be. A solid start to say the least.

“Consumed By Oblivion” enters the fray, again with mournful overtones, great sadness is to be found here, and then comes the planet destroyer, the riff that surely sounded before the formation of every known asteroid field. All matter is destroyed in its path, and the procession proceeds onwards, ever onwards to the next destination until nothing is left but emptiness and sorrow. Powerful stuff.

Closer “Ancient Seed” brings the end of times, all rot is ending it’s cycle, life itself will shortly cease to exist, and the universe weeps tears that no living creature will ever know about for they are long gone. The dirge, again slow and ponderous, ending with a thunderous crescendo. The universe was created with a big bang, and goes out on a similiar note. The lights that adorned the heavens now extinguished forever. The void is all that remains.

Three short songs of considerable excellence, no mean feat considering that this is their debut. Our aforementioned friends have well and truly delivered again with this one, and we can now only bide the time until a full length is cast upon us. A void is an empty place, but there is nothing empty at all within this release, it may be the soundtrack to cosmic oblivion, but what a fine oblivion it is.

Get your fingers on this before the end right here!