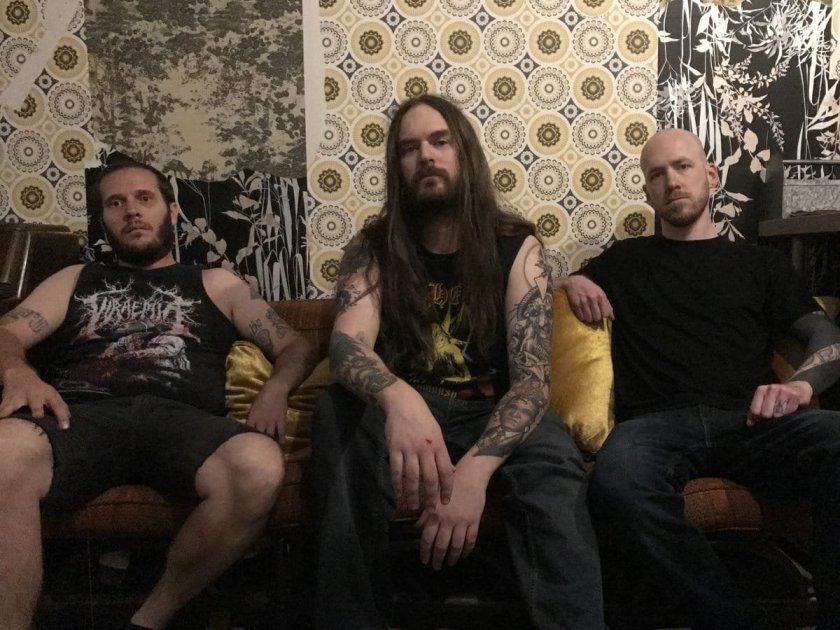 – Goya is a 3 piece Stoner/Sludge/Doom Metal band. They play doom metal on the heavier side and I would describe their songs as slow to midpace. Their bandcamp page lists Electric Wizard, Sleep, and Black Sabbath as their main influences. They have numerous releases and I will try to highlight them below. Hopefully you will enjoy them as much as I do.

– Goya’s debut album was released on December 13, 2013. This full length album clocks in at just under one hour. The songs are really solid, especially for a debut album. 777 begins with 2 faster paced tunes in Rites of the Hashage and Necromance. Both are good stoner doom metal tunes. Then my favorites off the album in Night Creeps and Death’s Approaching
Lullaby. Night Creeps reminds me of the tracks from Electric Wizard’s Dopethrone. Death’s Approaching Lullaby has the most monstrous doom riff on the record. I have a hard time playing this track without the desire to play it again. This album does not have a lot of diversity compared to some of the later albums in Goya’s discography. However, it is a very good.

– The follow EP Satan’s Fire, was released on December 9th, 2014. It is quite short with only 3 tracks and totals roughly 20 minutes in length. It opens with Malediction and Death which is a good track. There is a long intro and the song kicks in after roughly 3 minutes. There is short 2 minute instrumental that follows. The EP ends with the title track Satan’s Fire.

– This is where Goya really starts to shine. The album shows diversity not seen on the other albums. Obelisk was released on August 1st, 2015. Nothin’ but Dead Stuff introduces the distorted guitars that would become a staple of Goya’s sound. Next up is one of my favorite Goya tracks in The Devil’s Prey. It has a very catchy riff. Obelisk is a good stoner instrumental song. Speaking of diversity, 300 eyes is a very moving ballad. Then Goya expands their sound in the faster paced sludge song The Sun. The album ends with two good stoner-doom tracks in Beyond Good and Evil and No Place in the Sky.

Recommended tracks: The Devil’s Prey, 300 eyes, The Sun, No Place in the Sky

– The Enemy is 24 minutes of stoner metal goodness. It was released on March 15th, 2016. This is a solid EP from Goya. It may not be as diverse as Obelisk but there are some good stoner-doom tracks. The title track The Enemy, is another of may favorite Goya tracks. It has a great riff and is a regular song in my rotation. Last is a more subdued stoner metal song. The EP then picks up with the song Light Years. It is a heavier track with a catchy riff. The EP ends with an extended version of the song The Enemy.

– This is an interesting collection of Goya’s past demo tracks. It was released on June 1st, 2016. Most are midpaced by doom standards. They are primarily stoner-doom with some sludge influences. There are certainly some highlights on here. The song Blackfire is very catchy and the drums very stand out. One of my favorite Goya tracks is here in Mourning Sun. Mourning Sun has that driving stoner sound with the distorted guitar that will certainly have the listener wanting more. Opoponax is a solid instrumental track. Night Creeps is stellar with a cavernous quality with heavy stoner riffs.

– This is certainly the best Goya EP. It was released on October 13th, 2016. The EP starts out with heavy riffs in Doomed Planet. The next track doesn’t let up. Hoof & Bone is also heavy as Hell in the mold of Conan and Crowbar. The pace may be a little slower but it is just as heavy. Sorrow is simply an intro to the closing track Dogma. I don’t care for this track very much. One problem is that it follows two of Goya’s best songs.

– This is the album the got me hooked on Goya. It was released on March 3rd, 2017. The opening track Omen is a three part song. There is a long intro that kicks in at roughly 4 minutes with a steady stoner riff that never lets up for the rest of the song. Germination is a very short but excellent instrumental track. It leads into Misanthropy on High. The closing track Disease is my favorite Goya song. It is the song that got me hooked on Goya after hearing it played on Liquid Metal satellite radio. It has one of the best riffs in stoner-doom metal. Words can’t describe how great the song Disease is. You need to experience it for yourself.

Hoped you enjoyed my introduction to Goya. Until next time…