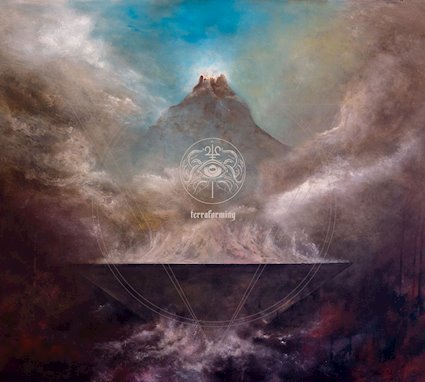 Doom Metal is one of those genres that welcomes variety and often times creates an all around rumble that can leave the listener shaking. One such band that is making their way through the radar is Jupiterian from Brazil and they have an album that will be released on Nov. 15th via Transcending Obscurity Records entitled Terraforming.

Jupiterian possess a certain alure in that they mask their identities which only adds to their unearthly atmosphere. Fans of the genre rejoice this band is jam packed with hefty amounts of Doom but you will also find hints of Sludge, Atmospheric, and Black Metal.

Terraforming is an album that flows together perfectly and creates an overall sense of otherworldly power. The opening track Matriarch oozes with doomy perfection, transporting the listener into a cosmic underworld of a thunderous domain. Seeing as a Matriarch is domineering this song works perfectly. Heavy doom laden riffs and dissonant vocals make this the ultimate track to set the mood. As if the atmosphere of this band isn’t already on point Jupiterian welcomed Maurice de Jong of Gnaw Their Tongues on the title track Terraforming. This song is ambient and gives off a sense of deprivation as the vocals are low and foreboding.

Forefathers keeps the overall sense of impending doom alive and combines all of Jupiterian’s sounds into one masterful track. This song presents imagery of ancient hooded figures rising forth in a mix of atmospheric rumbling passages. Us and Them in my opinion is probably the best song on this album and the most accessible to fans of the genre. Its is all around catchy and there is a lot going on without seeming bogged down. At around the four minute mark there is a short tremolo picked melody that is the precursor to a haunting combination of harmonies. The final track Sol keeps the sound alive along with the incorporation of big riffs that are familiar in Sludge bands, like UK‘s Conan. I can only hope that this band gets the recognition they deserve, this album is a force to be reckoned with and fans of the genre be sure to check this album out upon release.