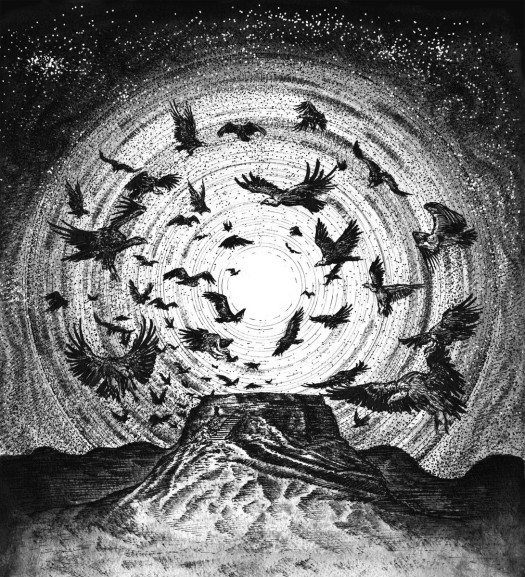 In the world of today’s Black Metal scene we come across a wealth of bands who seek to procure the very foundation of the genre. If you have kept up with the various acts you will most likely notice that Iceland has exploded like a volcano, evoking a number of molten ridden bands.Both
Misþyrming  and Sinmara have released superb debut albums that have left me hungry for more and this split has reminded me once again why I love both bands. It is no secret here that The Metal Wanderlust is a fan of Iceland’s scene, with bands like Carpe Noctem, Svartidauði, Wormlust, and Mannveira just to name a few there is something for everyone.

Let’s start off with Hof by Misþyrming, what can I say? After the release of  Söngvar Elds Og Óreiðu in 2015 the band received rave reviews and I was instantly transported into the abyssmal dark atmosphere that is Misþyrming . Fast forward to Hof… this song hits you right in the face full force like the impending apocalypse. Its evil, filthy, and it will send the listener to the depths of the black encrusted earth. Now I can’t speak the language and I’m sure Google Translate does a horrible job but the English lyrics from what I read definitely sum up the sound.

Sinmara also made their mark with the 2014 debut Aphotic Womb and like Misþyrming they too left me craving for more. Ivory Stone is an earthly brew of swarming Black Metal, relentless and unforgiving much like Hof. I am hoping that this split has paved the way for new albums by both bands. Iceland has something special, and in my opinion they have become a driving force within the genre.